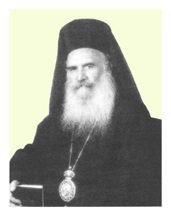 His Eminence Archbishop Gregorios, former Archbishop of Thyateira and Great Britain was born in what is today the Turkish occupied village of Marathovouno of Cyprus in 1928. The youngest of nine children, he was orphaned from his father Theocharis Hadjittofi at the age of just 3. After completing a short time as a monk in the Sacred Monstery of Stavrovouni Cyprus, he was ordained to the deaconate by Archbishop Makarios III of Cyprus.

He received his grammar school education initially at the Lefkoniko High School followed by the Pancyprian Gymnasium in Nicosia where he graduated in 1954. Following this, he attended the Theological School at the University of Athens from which he graduated in 1958.

He came to London in April 1959. He was ordained presbyter by Metropolitan Athenagoras Kavvadas, and was appointed assistant parish priest at All Saints Church, London. He served as parish priest in charge of that church until August 1969.

Besides his theological studies at the University of Athens, Archbishop Gregorios received post-graduate tuition at Cambridge University. During his studies there, he established the local Greek community. He is noted for his modesty, industriousness, sincerity and total devotion to the mission of the Church and Hellenisism in Great Britain. He totally co-operated as a co-worker of Athenagoras in the organisation and development of numerous parishes of Great Britain.

On the 16th April 1988, the Sacred Synod of the Oecumenical Patriarchate of Constantinople, the Bishop of Tropeou was unanimously elected as Archbishop of Thyateira and Great Britain. The selection was without doubt in recognision of the valuable work that His Eminence had and is continuing to do for the Greek Orthodox community in Great Britain. His Patronage of GALE (Greek Association for Language Enhancement) has assisted greatly in the creation of St. Cyprian's, the first Voluntary Aided Greek Orthodox primary school in Great Britain, thus establishing a firmer foundation for the further development of the Greek community in Great Britain.