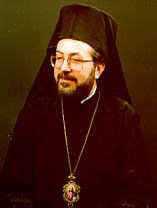 His Eminence Elder Metropolitan Dimitrios of Princes Islands, honorable exarch of Propontis, was born in Tatavla Constantinople on October 26, 1952, to Constantine and Zoe Kommata. He studied at the Great School of the Nation, the Holy Theological School of Halki, the Theological School of the Aristotle University of Thessalonika, where he graduated in 1975, and the Theological College of Oak Hill in London (1980-1981). He was ordained deacon on July 14, 1974, by the late venerable Metropolitan Meliton of Chalcedon, thereafter serving the Mother Church from 1975 onwards in various administrative capacities of the Patriarchal Court over more than thirty years and ministering to the needs of the Patriarchate of Constantinople in diverse ecclesiastical assignments throughout the world (such as in the United States of America, Australia, Greece and elsewhere). He was elevated to Metropolitan of Sevasteia from the position of Grand Archdeacon on October 2, 1990, ordained to the episcopate on November 4 of the same year by his spiritual elder, the late Patriarch Dimitrios, and the Holy and Sacred Synod. For over sixteen years he served as Director of the Personal Office of Patriarch Bartholomew (1991-2008), contributing – at the repeated recommendation of the leaders of the Holy Archdiocese of America and its information media – to the consolidation of the favorable interest of the Mother Church for the Archdiocese during the transitional period of its history, from the resignation of the late venerable Archbishop Iakovos to the completion of the composition of its new Constitution (1995-2003), assisting in the preservation therein of the crucial canonical boundaries related to its dependence on the Ecumenical Throne. More specifically, he participated in the Patriarchal Exarchy to the Archdiocese of America in 1995, the Clergy-Laity Congresses in Philadelphia (2000) and Nashville-Tennessee (2006), as well as in the special Mixed Council responsible for drafting the Constitution of the Holy Archdiocese.

During the arising crisis regarding the challenge of the canonical rights of the Ecumenical Patriarchate over the Metropolitanates of the “New Lands” by the Church of Greece (2003-2004), he vehemently supported the rights defined by the Patriarchal and Synodal Act of 1928, authoring and consequently – following three years of research – publishing a critical and comparative study (in December 2006), entitled The Patriarchal and Synodal Act of 1928 with the Obscured Application of its Conditions, which received a positive response and favorable academic review and publicity from numerous specialist Professors of Church History and Canon Law. During 2005, he participated in the Patriarchal Exarchy to the Holy Mountain, which definitively and ecclesiastically resolved the problem troubling the Church for 30 years regarding the schismatic Esphigmenou Monastery by appointing a canonical brotherhood in its place. He also participated in two Inter-Orthodox Councils, the Pan-Orthodox Council of Constantinople (May 24, 2005) for the Patriarchate of Jerusalem and the Expanded Council of Geneva (May 17, 2006) for the Church of Cyprus. His addresses and articles have appeared periodically in different church publications and anniversary volumes, while he has also been honored with numerous ecclesiastical distinctions. Since the year 2000, he has regularly served as member of the Holy Synod as well as of many Synodal Committees.

On 19th April 2018, he was unanimously elected Elder Metropolitan of Princes Islands by the Holy and Sacred Synod of the Patriarchate.