A Brief History of the Temple of St. George

A Brief History of the Temple of St. George

The Patriarchal Church of St. George

Ὁhe church of St. George (the Great Martyr and Trophy-Bearer) is the fifth church in Constantinople to house the Ecumenical Patriarchate since the 15th century. Formerly a convent for Orthodox nuns, it was converted to the patriarchal offices by Patriarch Matthew II (1598-1601).

Patriarch Timothy II refurbished the church in 1614 (see inscription on main façade), and Patriarch Jeremiah III rebuilt it after a fire in 1720 (see inscription over right entrance). It was repaired in 1836 by Patriarch Gregory VI and restored recently under Patriarch Bartholomew. The church of St. George is divided into vestibule, nave, and altar and retains the traditional basilica style with three aisles. The vestibule contains icons of St. George and the Prophet Elijah, who is wearing fur in memory of the furrier merchants who brought a water system to the Phanar. 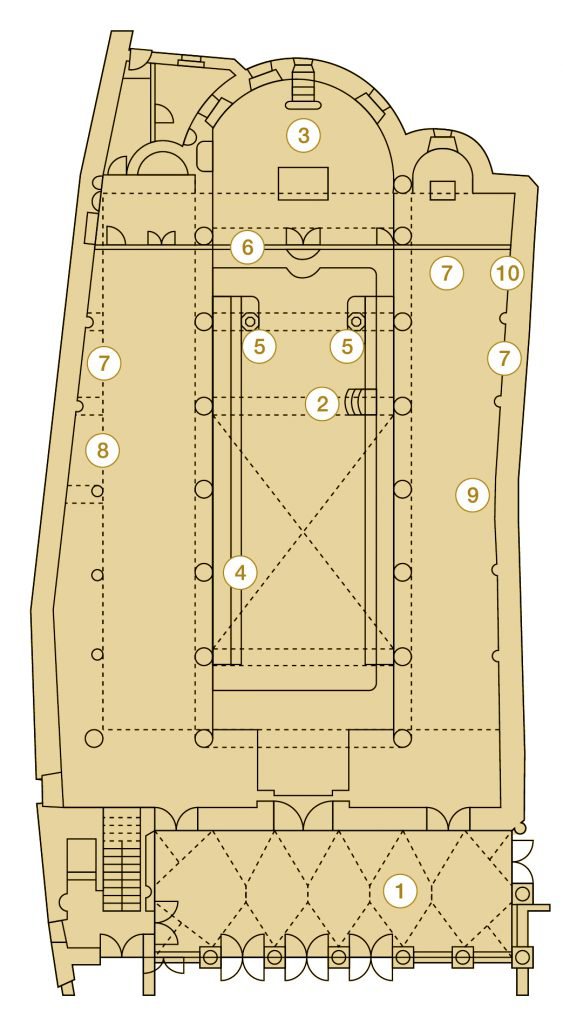 1. The Candle Stand
Made of walnut and inlaid with ivory petals in the shape of pentagons, the 17th-century candle stand in the patriarchal church is a replica of early Egyptian craftsmanship.

2. The Throne
The patriarchal throne is traditionally attributed to St. John Chrysostom (398-404), but an inscription on the gable eaves dates it to 1577. Four meters tall and fashioned in the form of a vine, it is made of walnut and inlaid with ivory, mother of pearl, and colored wood. Its 17th-century icon of Christ Pantokrator was commissioned by Patriarch Paisios I.

3. The Synthronon
Inside the sanctuary and behind the altar, the synthronon is an elevated marble throne (for the Patriarch) surrounded by eleven wooden thrones (for members of Holy Synod). It dates to the early 5th century, and St. John Chrysostom may have sat here.

4. The Pulpit
The pulpit is traditionally attributed to St. John Chrysostom, but an inscription dates it to Patriarch Gabriel III (1702-7). Strikingly wrapped around a column, it is made of walnut and mother of pearl and embellished with a vine motif.

5. The Cantor Stalls
These two stalls, made of walnut with ivory inlay, are among the artifacts transferred in 1942 to the Phanar from the convent of Panaghia Kamariotissa on the island of Halki.

6. The Iconostasis
The icon screen that separates the nave from the altar is an 18th-century conglomeration of Byzantine, Renaissance, Baroque, and Ottoman styles. Carved out of wood and recently gilded, the screen is divided into three levels; its smaller icons allow individual veneration.

7. Three Important Icons
Two icons on the right aisle predate some of the iconography of Hagia Sophia and Chora Monastery. The 11th- century mosaic icon of Panaghia Pammakaristos depicts the Mother of God holding the infant Christ. As patron icon of the former patriarchal church of Panaghia Pammakaristos (1456-1587), it was transferred to all subsequent patriarchal churches. The 11th-century mosaic icon of St. John the Baptist was also originally located in the church of Panaghia Pammakaristos. On the left aisle, the icon of Panaghia Faneromeni, revered for its miraculous properties, was transferred here from Kizikos (today’s Kapıdağ, Turkey). Overlaid with gold and silver, it predates the 14th century.

8. Three Remarkable Bishops
Like icons, relics are a central aspect of Orthodox worship, underlining the transfiguration of the material world by divine grace. Basil the Great, Gregory the Theologian, and John Chrysostom, the “three Hierarchs” (whose joint feast day is January 30), were the most influential theologians of the early Church, and they are venerated ecumenically in Christianity. After the Fourth Crusade (1204), the relics of these saints were taken from Constantinople to Rome. In November 2004, those of St. Gregory and St. John Chrysostom, the two renowned archbishops of Constantinople, were solemnly restored to the Ecumenical Patriarchate, as a generous gift from Pope John Paul II. Ecumenical Patriarch Bartholomew presided over their return, and they are now preserved on the left aisle of the church of St. George. More recently, the relics of St. Basil were also returned from Rome.

9. Three Remarkable Women
The relics of St. Euphemia the Great Martyr (4th century), whose feast day is September 16, are a precious spiritual treasure. St. Theophano the Empress (r. 886-93), the wife of Emperor Leo the Wise, is commemorated on December 16. Although the third set of relics is traditionally attributed to Solomone, mother of the Maccabees, whose feast day is August 1, it probably belongs to Mary Salome (commemorated on the second Sunday after Easter), one of the myrrh-bearing women, who first witnessed the Resurrection.

10. The Column of Christ’s Flagellation
One of the most treasured and ancient relics of the patriarchal church is this remnant of the column where Christ was bound and whipped by Roman soldiers during his passion and before his crucifixion. Two other portions are preserved in Jerusalem.